'Basrogrh' (Basroil) is a Roil-class Assault ship of the Humankind Empire of Abh's Star Forces. The vessel was under the command of Deca-Commander Abriel Lafiel and was part of the 1058th Assault Squadron (Battalion) Latouche, 1st (Division) flight.

The original Basrogrh was launched in I.C.Y 955 from the Lespor shipyard in Lakfakalle. It was number 18, but it is unclear which this refers to. As usual it was assigned to the exercise and training fleet. After a (three) month shakedown run with its first crew the ship was commissioned. It was sent to the Vobeirunei Naval Base to be part of the 1058th Assault (Battalion) Squadron.

The Basrogrh saw first battle during a brief engagement known as the Skirmish at Aptic. The 1058th Assault Squadron was ordered with several others, to engage and destroy an enemy scouting party made up of Patrol Ships. The Basrogrh barely managed to escape the EM cannons from the patrol vessel but survived with only minor damage.

The next combat situation occurred during a reconnaissance mission to the Wimple system. The Basrogrh and its sister ship, the Seigrogrh, suffered heavy damage from an ambush by the United Mankind's new multi warhead mine. Low on fuel and power, the crew decided to abandon the Seigrogrh and to move all men and fuel to the Basrogrh. The Seigrogrh went down with its command crew, who were trapped inside the bridge. The Basrogrh made it back to allied forces after a 50-50 gamble between the enemy forces and allies, all thanks to Lafiel's "great" use of instinct.

Sometime later, the Basrogrh took part in the defense of the Aptic Gate, a strategic point of Operation Phantom Flame, as part of the Aptic Defense Fleet in the Aptic Campaign.

The Basrogrh I was destroyed in battle, but the crew was able to evacuate. Three of the crew members were killed. 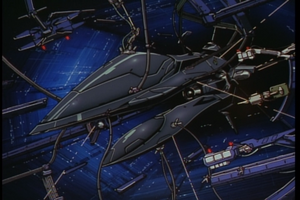 The surviving crew was given a newly built Roil-class ship of the same name at the Vobeirunei Naval Base.

By late I.C.Y 956, the original command officers transferred from the Basrogrh to a new ship, while its crew members moved on to other posts, or retired.

Add a photo to this gallery
Retrieved from "https://seikai.fandom.com/wiki/Basrogrh?oldid=7281"
Community content is available under CC-BY-SA unless otherwise noted.